Menu
MENU
Home > Blog > Is Time Running Out For Your Dental Restorations? 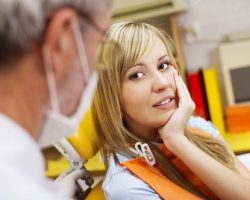 Whenever a tooth is repaired, whether with a filling, crown, inlay, or any other kind of product, it’s called a dental restoration. If you’ve ever had a restoration placed you probably haven’t thought about it very much since you had it put in. Most patients don’t even realize that all dental restorations have a life expectancy, and it really isn’t very long!

A dental restoration that goes bad due to age or damage can cause serious damage to the tooth it’s supposed to protect. If you don’t get a failing restoration repaired or replaced there’s a possibility that you could completely lose the tooth!

The two most common dental restorations in the world are fillings and crowns, which is what we’re going to focus on today. If you’ve never considered the age of your restorations and thought that they were getting old it’s time to think about it!

Fillings generally last about ten years, though they can last longer depending on the material. Metal fillings that get old are a particular problem due to how different they are from natural teeth. As a filling ages the chances of two serious problems get larger: cement wear and tooth fractures.

Crowns, on the other hand, can last around 15 years. The problems that occur with them are a bit different, though decay of the protected tooth is still a concern.

Metal fillings are cemented into your tooth because cement simple can’t bond to teeth. The cement that holds fillings in place is reliable, but it doesn’t last forever. It is, in fact, the most common cause of filling failure.

When filling cement wears out small channels for between the tooth and the filling. Those channels are too small to see, but are plenty large enough to allow bacteria to get inside and start causing tooth decay. Cavities that start forming on the inside of your teeth are particularly dangerous because they’re so hard to spot – many times they aren’t caught until they’ve broken through the tooth!

Metal fillings are also notorious for causing microfractures in teeth. Your teeth are meant to flex and bend ever so slightly so that they’re better able to bear the load of chewing and other forces on your teeth. Metal, on the other hand, doesn’t bend like teeth at all! As fillings continue to be an interruption in the way your teeth are supposed to bend they can weaken and crack the tooth.

Those microfractures are just as bad as cement channels – bacteria gets in, starts causing decay, and in many cases isn’t noticeable until it becomes really bad.

Dental crowns completely cover the remaining portion of a damaged tooth, keeping it safe from further harm. They have to be cemented in place too, but since they go all the way to your gumline decay isn’t as serious a chance.

If you end up developing gum disease or suffering from any gum recession, however, decay under a dental crown becomes very possible. The line where your crown meets your tooth is a dangerous spot – if any bacteria gets between your crown and your tooth it can spread further and further until your crown simply falls completely off!

In cases where a crown falls off due to decay there is little chance of it being reattached. Decay under a crown usually spells a death sentence for a tooth because of the extensive damage that can happen. It isn’t uncommon for us to have to extract a tooth that used to have a crown on top because it became too decayed to save!

At New Albany Implants we take a general ten year rule of thumb when it comes to monitoring the health of dental restorations. As you near the decade mark with any kind of dental device the chances of failure and wear become much greater.

Routine appointment at our office will always involve inspection of your dental implants, but once we hit that ten year mark we’ll start paying extra close attention to them. The worst thing that can happen to a tooth is to be destroyed by the very thing that should have been keeping it safe!

Don’t End Up In Trouble – Protect Your Restorations!

These kinds of problems don’t need to happen, and they won’t with good oral care habits and regular professional appointments. Let us help you protect your dental restorations and your teeth – call us today at 888-469-3982 or request an appointment right here online.