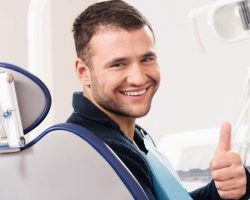 At New Albany Implants we love being on the cutting edge of dental technology. Staying abreast of new forms of care that make our patients’ lives easier is what we love to do, and that’s why we’re so excited about a potential new treatment for gum disease.

While the research is still in its preliminary stages there seem to be some promising results emerging from silicon nitride, a bioceramic compound that’s currently used in spinal implants. Gum disease is the leading cause of tooth loss in the world today, and affects around two thirds of adults at some point in their lives. Any opportunity to make treatment easier definitely has our attention!

From The Spine To The Teeth

Silicon nitride has been a huge boon to the medical industry. In many ways it has replaced titanium as the implant material of choice, at least for spinal fusions. It’s able to bond to bone in similar ways to titanium, but with a huge added benefit: it naturally fights bacteria.

Researchers tested silicon nitride on oral bacteria, and they found some really amazing things. Oral bacteria that made contact with silicon nitride actually had its DNA damaged to the point where it was unable to feed or reproduce. And it did all that in just six days!

By chemically or thermally changing the surface of the silicon researchers were able to control the bacteria in a lot of different ways: slowing their metabolism, growth, and ability to spread. This amazing development means that gum disease therapy could soon be very different from what it is today!

Don’t get excited yet, though: the use of silicon nitride to treat gum disease is still a ways off. More research is needed to figure out if it will work well, so you’re going to have to stick to conventional treatments for now.

Our mouths are full of bacteria, and many of the strains resting on our teeth are harmful. When they get below the gumline they spread, causing the body to react the way it does to every infection: inflammation. It’s inflammation that causes your gums to turn redder, puff up, and bleed easily. Continued inflammation will result in gum recession and tooth loss. In short, gum disease is nothing to take lightly.

We know that gum disease is caused by oral bacteria, but how does that bacteria end up getting beneath your gums? There are a number of risk factors that make gum disease more likely, many of which are within your control.

How We Treat Gum Disease

If you come to our New Albany office with symptoms of gum disease we’ll first figure out how bad it is. In many cases we can treat it simply by helping you learn to care for your teeth better at home. In more severe cases we’ll need to perform a deep cleaning, which involves going below the gumline to remove bacteria.

Also known as scaling and root planing, the process cleans out the pockets between your teeth and gums, allowing them to heal free of bacteria. It’s the most successful, simplest, and fastest way to get relief for gum disease – at least until silicon nitride treatment becomes reality!

Don’t Mess Around With Your Gums!

Your gums play an essential role in stabilizing and supporting your teeth. Without healthy gums you’re almost guaranteed to lose teeth as you age, so don’t take them for granted. If you notice even the most minimal bleeding when brushing you should give us a call!