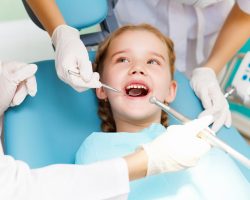 Cavities in children are not uncommon. If anything, it is unusual for children to make it to age 17 without getting at least one cavity — and most kids will have dental decay in two or more teeth by then. For this reason, researchers, family dentists, and political leaders are asking: is one possible solution enforcing brushing and flossing while kids are in school? Who supports rules about brushing during school hours? Are some parents opposed to the idea?

Are Rules About Brushing In School A Good Idea?
England may be one of the first countries to test the waters — and see if enforcing tooth-brushing in school is practical. English family dental care and children dental care committees are also encouraging schools to pass out complimentary toothbrushes and fluoride toothpastes for children to use at school and in their homes. A typical toothbrush contains more than 2,000 bristles in groups of 40, and children and their parents alike should replace toothbrushes every three months, or whenever they are sick. Brushing at school may help instill better habits at home and ultimately help children retain more tooth enamel, the hardest surface in our bodies and the protective layer on teeth responsible for preventing stains, tooth sensitivity, and dental decay.

Why Some Parents Think It’s Too Much
While rules about brushing teeth may be possible in England and the U.K., there may be much more resistance to the idea here in the U.S. Why? American parents are already upset about Michelle Obama’s intervention in school lunches. Some parents argue the healthy lunches aren’t substantial enough, especially for children from low-income families who may not have enough to eat at home. These parents aren’t going to be happy about more rules — however well-meaning they may be. A good portion of parents are arguing that their children’s health, be it their nutrition or their dental and oral hygiene, is parents’ responsibility — and the government and schools should stay out of it.

Is it intrusive to ask kids to eat healthier lunches? Would it be unreasonable for family dentists and schools to impose rules about brushing during school? The answers to these questions are not as clear-cut as some think.